The UFMG is one of Brazil’s best universities and has been frequently rated among the ten best universities in Latin America (in the last ranking of Latin American universities by Times Higher Education the university earned the 8th place). It has didactic and research activities of high quality in all areas of knowledge, displaying excellence also in arts and humanities in general and particularly in the field of philosophy. The main campus of the UFMG in Belo Horizonte offers excellent conditions for hosting big events, having very good facilities such as large amphitheaters (some for over 400 people), smaller rooms for parallel sessions, bookshop, pharmacy, office supply stores, libraries and also restaurants of several price levels.

The Philosophy Department of the UFMG has a long tradition in studies and actions in Aesthetics (dating from 1969 with the creation of its “Laboratory of Aesthetics”) and since 1993 it has been involved in the organization of biannual large conferences on this matter, which attracts researchers and students from many countries and regions around the world. The last one, “Arts of the body, bodies of art” was held last October in the baroque town Ouro Preto — near Belo Horizonte — and was organized by ABRE in cooperation with the Federal University of Ouro Preto and the Federal University of Minas Gerais. In this occasion, over two hundred papers and lectures were presented by researchers and graduate students coming from all regions from Brazil and from abroad as well. 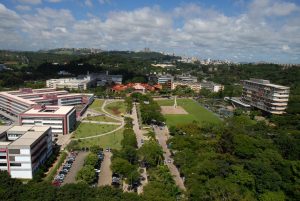